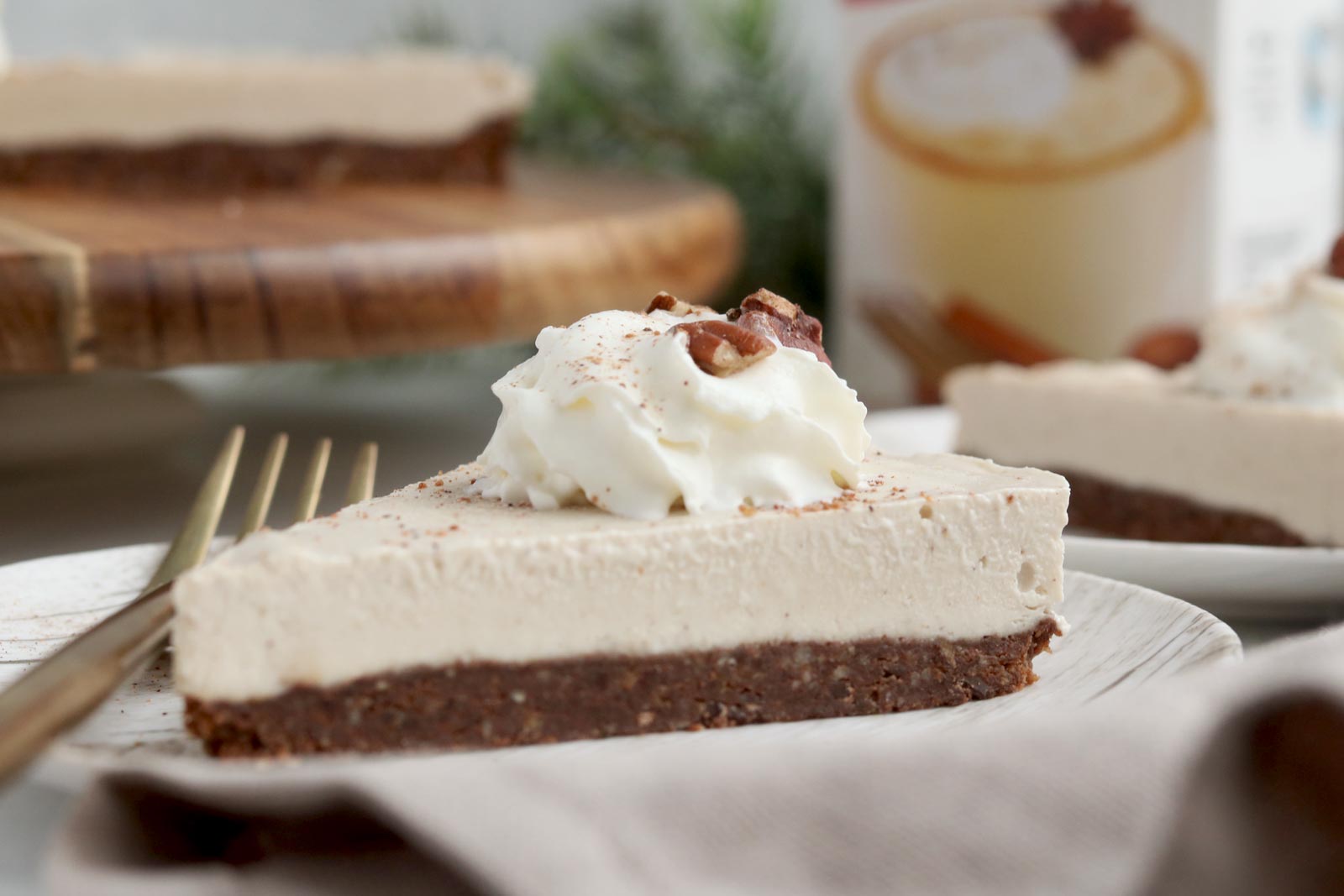 Inside Scoop: A new holiday favourite, this Vegan Eggnog Cheesecake.

I’m going to come clean with you right now – I wish I had documented all of my vegan eggnog dessert fails this holiday season.

First, I tried to make a vegan pudding with arrowroot starch that ended up looking like it was forming a colony of bacteria (think SCOBY), which was a total fail.

Then, I tried making vegan eggnog mousse with aquafaba, I honestly have no idea what I did with that one either. Total fail.

But determination brought me here, and I finally nailed a vegan eggnog dessert recipe for you that does not suck! Woohoo! I’m pretty stoked.

I initially wanted to make a vegan eggnog mousse that was rich and creamy, but I definitely had to squash that idea, unless it was chia pudding (which has been done with our Healthy AF Pumpkin Pie Chia Pudding Jars) so I thought I could be a little more creative and get you guys something that was:

And I did just that!

This Vegan Eggnog Cheesecake is the right kind of eggnog dessert that is loaded with flavour, really easy to make and completely vegan/ contains no refined sugars.

Seriously, you will LOVE it. It’s so yummy. I have been diving into a slice of this cheesecake every night since I whipped it up.

To be honest, it doesn’t even need to be the holidays really, I would eat this any day of the week, any time of the year. However, eggnog is totally seasonal, so it would be hard pressed trying to get my hands on some nog during the summer months, but I am tempted to re-create this recipe using vanilla bean! Yes. I just might make a chocolate vanilla vegan cheesecake. Hold me to it!

It’s like an ice cream pie, but healthier, and contains no grains, no dairy, is high in healthy fats, and is amazing in so many ways.

Here are some health benefits of this vegan eggnog cheesecake: 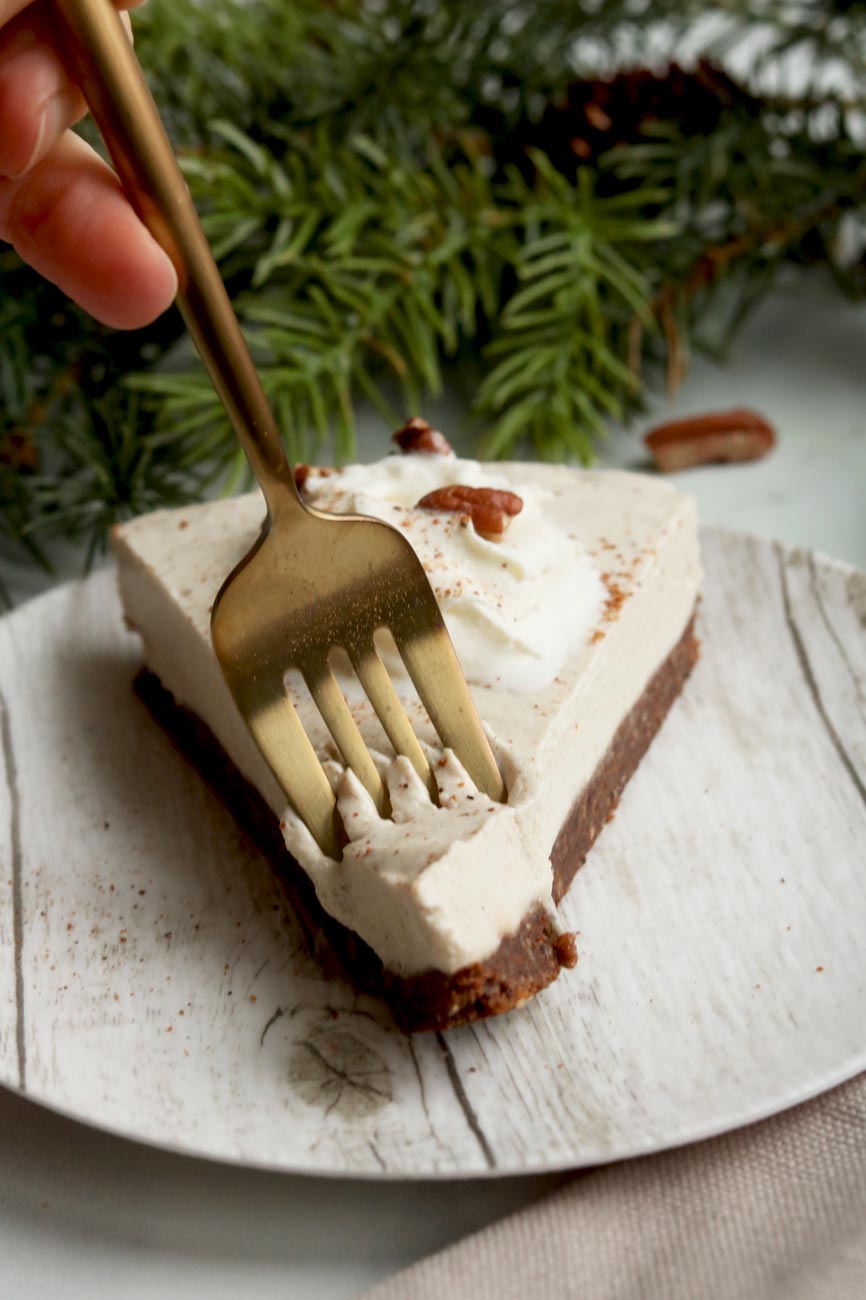 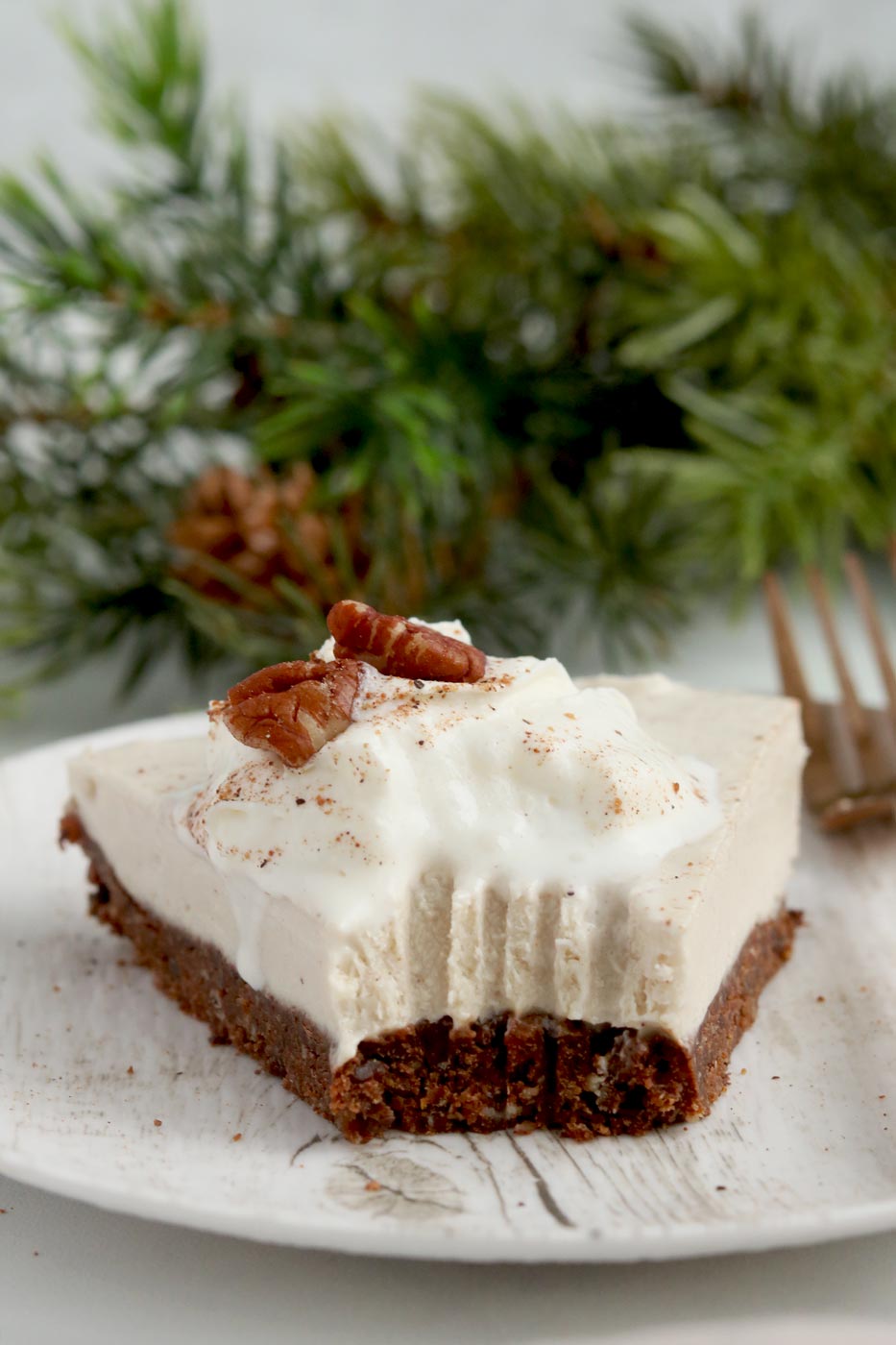 Get The Right Kind Of Eggnog

The one thing I would suggest with this vegan eggnog cheesecake is that you get the right kind of eggnog.

So, being dairy-free, or vegan, you already know that getting the right nut milk brand isn’t always the easiest. If you’re not making it yourself (which I definitely did not in this situation), then you have to navigate through brands, artificial ingredients, sugar, additives… and so on.

After buying a couple of other dairy-free eggnog brands, I finally ended up getting my hands on So Delicious Dairy Free Holiday Nog and let me tell you, if you are looking for a dairy-free eggnog alternative, this is the one!

It’s sweet, nutty and will totally hit that eggnog craving.

For this recipe, it calls for 1 cup of dairy-free eggnog to 1 cup of soaked cashews, the base is made from dates, chocolate chips and walnuts, and other than that, there’s not much else to it.

And, if we haven’t loaded you up with enough healthy holiday recipes yet, you can absolutely download our Healthy Holiday Cookbook which has 25 delicious holiday recipes, including sides, mains, cocktails and desserts.

What do you think about this Vegan Eggnog Cheesecake? Do you think it will make an appearance on your holiday spread? 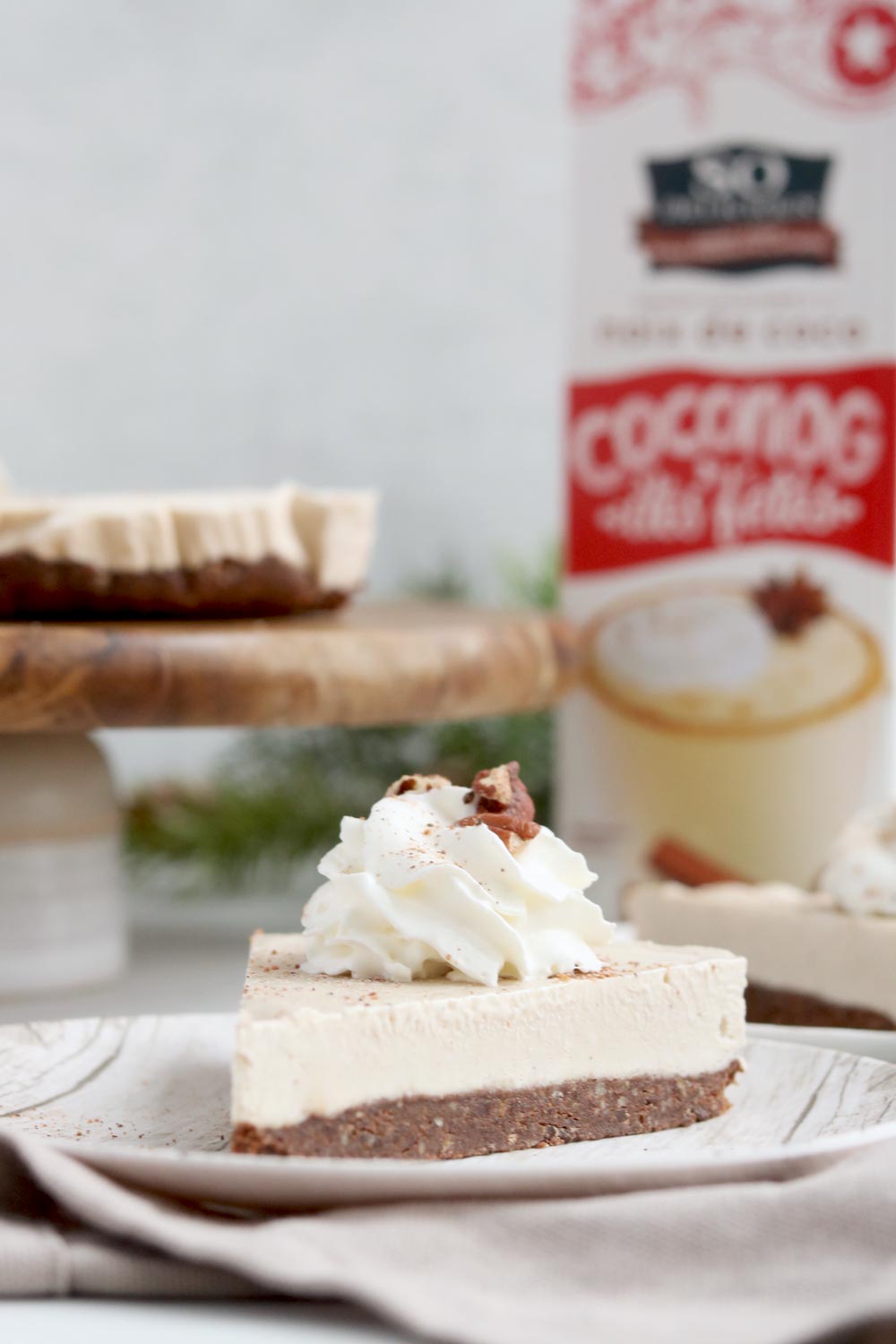 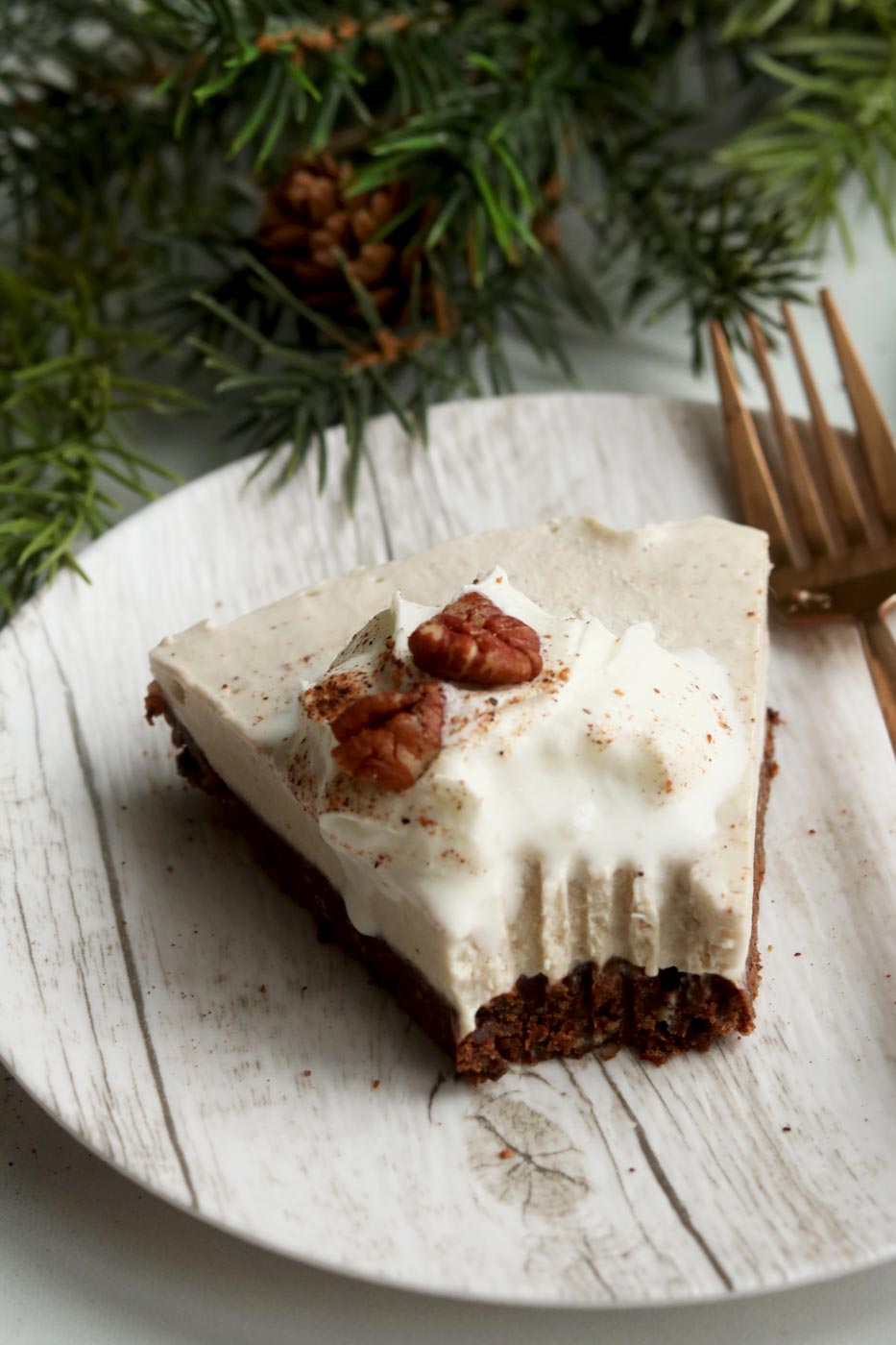 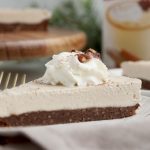